Alphabet worksheets are great for reinforcing lessons already learned. Once children have learned the letters and their sounds, it's time to teach how to write each of the letters. 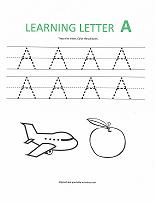 Learning to write the letters typically takes longer than learning the letters. That's because writing is a skill that requires hand-eye coordination and concentration. In order for children to acquire correct letter formation a lot of practice is necessary. Tracing letters makes it easier for children to understand how the letters are formed.

The following preschool worksheets are great for writing practice. Children typically learn to write capital letters prior to learning the lower-case letters. Each of the preschool worksheets below focuses on one Capital letter of the alphabet. Each letter can be traced several times. Included are pictures of objects starting with each letter that children can color.

Writing letters and seeing objects starting with the same letter reinforces both the letter and the sound each letter makes.

To print, simply click on the printable of your choice. This will open the file in PDF format. Please keep all copyright information intact.

After using the preschool printables, follow-up with blank lined pages so that the kids can make the letters without tracing. Give a child lots of room to practice and soon enough they will be turning letters into words. I've yet to see a child who isn't "oh so proud" when they clearly write their first word.

What should their first word be? First on the list is teaching a child to write their name. Most children are fascinated by the letters that make up their own name, so it becomes something they truly want to learn. After their name, move on to two and three letter words... and before you know it, they'll be creating sentences.

And, as any parent or grandparent knows, those first little notes are absolutely priceless.

Alphabet coloring sheets﻿ that each have several pictures to color that all begin with the same letter. Every letter from A to Z!

Alphabet Worksheets - Learn letters and their sounds in a fun way.

Alphabet coloring pages - Large letters and a fun picture for each letter.

Alphabet Flip Book - A mini-photo album and free printables will easily create a great way for preschoolers to learn colors.

Alphabet Mazes - Simply color the squares of a specific letter to solve the puzzle.

Alphabet Word-Finds - One page for each letter (except X). Reinforce the sound each letter makes.

from alphabet worksheets to home page

"Under the Sea" Coloring