Alphabet printables are a great hands-on tool to help teach the alphabet. A flip-book is fun for kids, although the book will be more effective if they can already identify several letters. 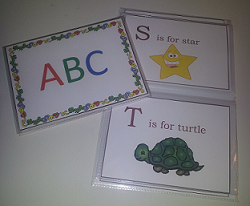 To make it easier for the child when you are teaching the alphabet... go slowly. Focus on one or two letters at a time. Practice making the sound the letter makes. Usually, it's fun for the kids to make the sound quite loudly. Once a letter or two has been learned, teach a couple more. Continue to review previously learned letters.

So, ... start small. Show a child a letter using a book or flashcard.

Walk around your environment and find items that start with the letter. Most homes have multiple items that begin with most letters. It's typically easier for a child to understand when the items are things they are familiar with.

Look at books, magazines, street signs, etc. to find the letter. Sort of like a "Where's Waldo?, changed to "Where's an A?

At mealtime, if a particular food starts with the letter, point it out. There are opportunities to learn letters everywhere. The most important thing is to make it fun for a child. Never push a child who does not seem interested.

Once several letters have been learned, a flip-book is perfect for reinforcing what has already been learned.

To print, simply click on the printable of your choice. This will open the file in PDF format. Please keep all copyright information intact.

With the preschool printables below, it couldn't be any easier to make a flip-book. What is a flip book? Simply put, a book where you can easily flip back and forth through the pages. Regular books with thinner pages are sometimes difficult for preschoolers. A flip-book is easier to manage with smaller hands.

Start with a mini photo album. These can be found at Wal-Mart and dollar stores for, well... about a dollar. The type that holds 24 photos is perfect for this project.

Free printables make this a simple project. Start by printing out the cover. Cut on the lines, and replace the photo album cover with the new cover. 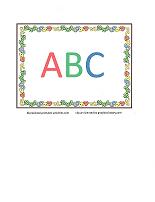 Then, print out the alphabet printables below. When cut out, each card should fit "just right" inside the album. Start by placing the letter A directly underneath the cover and continue on to Z. 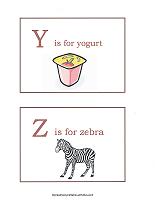 When you are finished, you'll have an alphabet book that is easy for preschoolers to flip through. This is an great way to reinforce letters and their sounds to children with kid-friendly pictures.

Encourage children to say both the letter and the name of the object out loud. Help them to think of other objects that begin with the same letter.

Keep the lessons short. You want your child to be engaged in learning and not feel as if it is a chore. The repetition of short lessons over a period of time will soon have your child knowing the letters and their sounds without any prompting.

The series, Learning Letters, allows the children to trace a letter several times and color some pictures that start with the same letter.

There are also alphabet coloring sheets that each have several pictures to color that all begin with the same letter. Every letter from A to Z!

Alphabet Worksheets - Learn letters and their sounds in a fun way.

Alphabet coloring pages - Large letters and a fun picture for each letter.

from alphabet printables to home page

"Under the Sea" Coloring